If you’ve ever swapped a newer transmission into an older car or truck, more than likely, you’ve probably had to do some tunnel modifications. These newer Tremec manual, and GM or Ford, automatic overdrive transmissions utilize much larger cases than their non-overdrive predecessors. The older cars were built for what was available at the time with no consideration that in 50 years someone may want to do something different. Trust me, we all cringe at the thought of cutting up a pristine floor pan just to swap in a transmission, but the heart wants what the heart wants, and busting out the plasma cutter may just have to happen. We’re also well aware that expert metal shaping isn’t in everyone’s skill set, so we decided that having an easy to install transmission tunnel patch was a great addition to our product line. Several years back we released the 67-69 Camaro tunnel patch for the guys doing 6 speed Tremec swaps, and since then, they’ve been a huge hit as it’s a perfect fit and looks factory when finished. 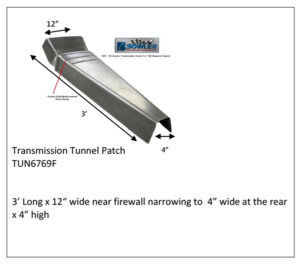 Recently we realized, that even though that tunnel was originally built specific for the Camaro, it will also work well for other cars since many of the 60’s era cars shared similar floor pan shapes. This lead us to take the original Camaro idea, leave out the ribs that are specific to the Camaro floor design, and release it as a universal option for anyone who is in need of a solid solution for their transmission swap. The small design change also allowed us to pull some cost out of the production and offer it at a slightly lower price, keeping in mind that this ain’t no piece of duct work like some of the other products on the market. We build these from 18 gauge steel that is individually hand formed by a metal fabricator with years of experience to give you the highest quality possible. 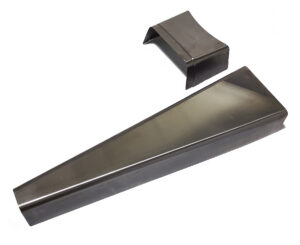 So far we’ve had some guys install these in Novas, Chevelles, and Mopars with a T56 Magnum or 4L80E being used. Since this is universal sheet metal raised tunnel, and is not specific to a car, it will require some fabricating skill and is recommended to be fully welded in place. Be brave, be bold, and build your car the way you want it!