As long as there are pick up trucks on the road, there will be people turning them into hot rods. I can remember back in the 90’s when the “sport truck” scene was getting off the ground and you were seeing a new kind of enthusiast emerge. During that time, a sport truck was more focused around the newer trucks on the road. Tons of 88-98 Chevy trucks, 94-up S10s, and the new 99-up Silverados were all king at the time. Ford and Dodge shared a little bit of the space, but their designs of that era just didn’t lend themselves as well to what was deemed popular. I noticed that it began to slowly faze out around the mid-2000’s and give way to include all different variations of truck. Basically the “sport truck” scene merged in with the rest of the hot rod culture and we started seeing a lot of guys building more pro-touring rigs rather than the bagged and slammed trucks form just a few years prior. Today, trucks of all makes, models, and years are hotter than ever. As soon as the LS engine became mainstream and plentifully cheap, and the performance suspension guys jumped on board, there wasn’t any reason to believe that a truck couldn’t be just as competitive as any muscle car. The square body Chevy trucks from the 73-87 era have really seen a surge in popularity over the last few years as more guys looking for a good deal on a project have found them to be readily available and easy to work on. We’ve begun to see more demand for parts development on this era of truck and as a response we’ve started to build some specific items to help in the area of transmission swaps. With the help of our own 1986 GMC shop truck Sandy Rose, we set off to figure out what we could build that would best suit this market.

When we first acquired Sandy Rose, she was a southern survivor truck, factory equipped with a very common 305 v-8 and TH350 drivetrain. Since she was completely rust free and primed for a good make over we decided to drop in a crate LS3 and new Tremec TKO600. 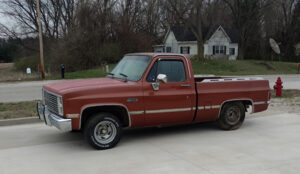 Being that this truck was a factory automatic we needed to secure a clutch pedal to convert over. We quickly realized that this wouldn’t be an easy or inexpensive task. Searching online revealed that there wasn’t anyone building aftermarket pedals and our best bet would be to purchase a used, rusty, worn out set from Ebay for $350! This was the first light bulb moment and deciding factor in the development of our new clutch pedal conversion kit. Once we broke it down we discovered that GM basically made the same brake pedal support bracket for all trucks, but added on an additional piece that carried the clutch pedal. Knowing this, we could create the same type of scenario to easily convert any automatic truck to manual. 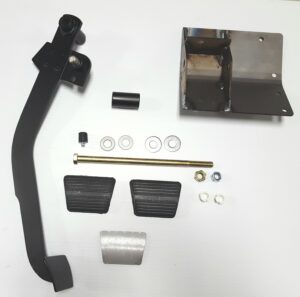 Clutch pedal, bracket, hardware, bushings, pedal pads, and even a new metal pad for the brake pedal should you choose not to cut it down. The beauty of this conversion kit lies in the simplicity of installation and the ability to use it for any manual transmission set up. Whether you’re retaining a stock 3 or 4 speed with mechanical linkage or going all out to a Tremec Magnum upgrade with hydraulics, this kit will work. In addition to the clutch pedal kit we also developed a hydraulic master cylinder conversion package. 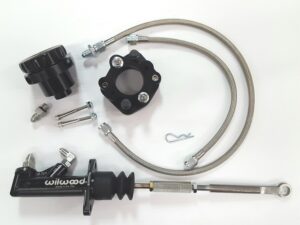 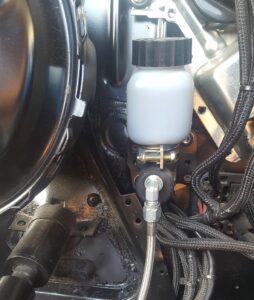 This hydraulics package also works with any OE clutch pedal kit as well so if you’re already set up with a clutch pedal you can still upgrade to a hydraulic clutch designed specifically for your truck rather than a universal set up. If you’re a hard core square body guy you’ll already know this, but these parts will also fit the full size Blazers and Suburbans all the way up to 1991. Be sure to check out our crossmember for the C10 as well. This is a great addition for any transmission swap you may be doing.