There are many hot button issues in hot rod culture that have a clear divide amongst its faithful. Chevy or Ford, LS or Small Block, Carburetor or EFI, Automatic or Manual. Sure there are some of us that don’t have a specific favorite, but for the vast majority, the choices are clear cut and unwavering. When it comes down to the automatic vs. manual transmission debate, a lot of guys lean to what they know they can work on, and the manual will usually win every time. If you fall into the automatic category though, you either have an extensive knowledge of how to build and set one up or you don’t, and for those of you that may be in the “not knowing” category rest assured you’re not alone. Automatic transmissions are one of the most misunderstood types of transmissions, and even if you’ve nailed down a decision on which one will be best for your project, you may still be left wondering how to pick out a torque converter to go with it. Luckily these days there are a lot of really great transmission builders out there that understand how to put together a transmission and torque converter combo that will allow you to really utilize the torque your engine is making. 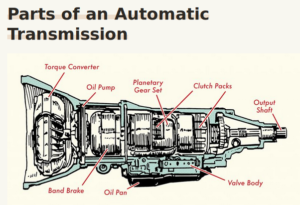 We come across many hotrodders each year that are fed up with their automatic because it just isn’t performing the way they want it to. Sometimes it’s in the way the transmission is built or programmed, but many times it can be traced back to the converter and incorrect stall speed. Yes, you can go buy any off the shelf converter, stick in your car and it will drive that car down the road, but going that route doesn’t always mean that you are getting the most performance you can get out of your engine and transmission. The torque converter stall speed is very critical in maximizing your engine’s performance and how the transmission will react to your right foot. Also remember that if you are using a transmission and torque converter out of one vehicle and then transplanting it in a completely different vehicle, it will perform completely different based on the engine size, rear gear, tire size, torque curve, camshaft grind, and vehicle weight. Each and every one of those factors plays a huge role in overall performance.

Torque converter stall is a commonly used and misunderstood term. Every converter has a “stall” built into it and each type of converter can only generate a certain amount of stall based on it’s size and design. Stall is the speed at which the converter will hold the engine speed and not allow any further gain, thus the engine “stalls”. The key word there is engine. The RPM at which stall occurs for a specific converter is a result of peak engine torque. It is also important to know that the same converter will not stall at the same RPM behind differently built engines. You may hear the terms “flash stall”, “true stall”, and “brake stall”, each are ways to describe, and try and determine, what RPM the converter stalls at for a given application, and each can be different for the same converter. The optimum converter for you will have special consideration taken in the setup of the impeller, turbine, and stator to achieve the desired stall speed for a given application. While stall speed is very important, it is not the only consideration when selecting a converter. Torque multiplication and efficiency are also critically important factors for drivability. Ultimately you want a converter that produces the right amount of stall without sacrificing performance. A torque converter will also provide a range of stall speeds based on the amount of load that is placed on the torque converter.

Think of it this way, have you ever driven a vehicle with an automatic that it seemed like you had to get way up in the RPM range before you really felt it move? Or, have you ever driven a vehicle that when sitting at a stop light it felt like it was trying to push through the brakes? Either of those conditions can be traced back to incorrect stall speed. When your torque converter is built for the engine and vehicle it is being used in you should never feel it pull through the brakes and you should always get good response right off of idle. There are a lot of different variables that come into play when building a torque converter for a specific application, but typically with most street cars you can get by with knowing the basics about your project. If you’re building an all-out drag racer, the dynamics of your entire car become critical and can mean the difference between winning and losing by thousandths of a second. A good converter or transmission guy will build you a set up that will work really well based on their experience and knowledge. 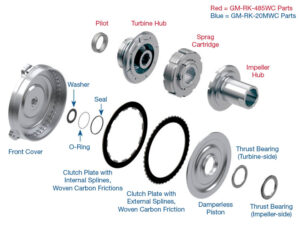 There are also different variations on torque converters for the same transmission depending on what the stall speed needs to be. For most mild built engines a stock size converter can be pushed to a slightly higher than stock stall speed for better performance, but there will be a point that you will need to move into a smaller diameter converter to gain a higher stall than what’s possible on a larger diameter unit. Then there’s also the option for multi-disc lock up clutches and billet covers for those higher torque and forced induction applications. If you take the time to get the correct set up for your converter you will be much happier with the end results, and it may even help disprove some of those myths surrounding automatics and their inability to be used for true performance.