For those of you that have been hanging on with your tired old T56, hoping it would last just a little longer, your day has come! Anyone who has an F-Body T56 that’s ready for an upgrade now has a solid, drop-in replacement that gives you all the strength of the current Magnum in the same size package you currently have. No modifications to the vehicle, clutch, bellhousing, crossmember, or driveshaft length needed. Selling price will be $3,395.00 as shown below. 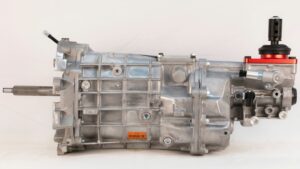 The long-awaited and highly-anticipated F-car-specific version of TREMEC’s popular Magnum 6-speed has finally arrived. Designed to replace T-56 transmissions in 1998-2002 GM F-bodies, the Magnum-F leverages TREMEC’s pervasive TR-6060/Magnum architecture in order to provide fourth-gen enthusiasts significantly improved performance and relief from a shrinking pool of quality T-56 replacement parts. Born in the vacuum created by the release of the original T-56 Magnum (now known simply as‘Magnum’) back in 2009, the Magnum-F fills a longstanding void in the overall Magnum line with regard to shifter locations addressing not only LS1-powered ‘98-02 F-bodies, but several other applications that utilize a similar shifter position. Beneficiaries include third-generation F-bodies, LT1-powered fourth-gens, LS-swapped late models of all varieties, and sport compact applications such as A80 Supras, FD RX-7s, and more! Where the original Magnum shifter locations may prove too far forward,and the extended length Magnum XL’s too far back, the Magnum-F’s in-between position often proves to be just right. Inside, the Magnum-F benefits from the same durable componentry found in many of today’s hardest hitting OEM muscle & sports cars. Over the T-56, the Magnum-F boasts increased face-width on all gears, a robust combination of double and triple cone synchronizers, enhanced webbing in the main case, provisions for a cooler circuit and more! TREMEC also took the opportunity to upgrade the shifter to an isolator type unit, like that found on its Magnum XL. The shifter reduces in-cabin noise and vibrations while at the same time providing the precise and communicative shift feel that all Magnums are known for. And like all TREMEC aftermarket transmissions, the Magnum-F is made from 100%brand-new OEM-quality content and features a 12-month/12,000-mile warranty 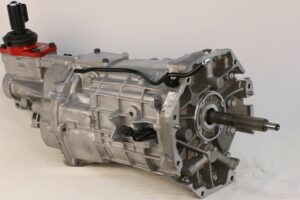