The Ford FE engine has a pretty cool history to it, and during it’s prime, it was setting records. Many of our favorite 60’s era Ford cars and trucks all came equipped with some variant of an FE and it wasn’t long before the racers figured out how to make them even faster. The 427 was dominating the racing scene in the 60’s racking up numerous NASCAR and a few Le Mans victories. Then when Ford developed the “cammer” version it was quickly banned by NASCAR due to Chrysler’s inability to come up with anything that could beat it. Luckily it found favor in the drag racing scene by tallying up several victories there and to this day is one of those “unicorn” engines that remind us of the times when no one cared about fuel economy.

Today the FE still has a loyal fan base and a cool nostalgia about it, but as technology and engineering continue to press forward, the engines of today provide an easier way to achieve great power, fuel injection, and modern comforts that are just harder to come by on an older engine.

The last decade or two has proven the GM LS/LT platform of engines as a clear winner for modern engines in a classic car. There will always be some debate on if it’s the “right thing to do”, but there’s no denying the LS engine is here to stay as the successor to the wildly popular GM small block. Ford’s newer modular engines have also been a popular choice, but with their OHC design they don’t lend themselves to a traditional look. So, if you’ve got an older car, but want newer technology, you either settle for the new look or you figure out a way to disguise a new push rod V8 to look like whatever you want. This was the task we took upon ourselves for this 63 Galaxie project.

What started out as a simple transmission swap quickly escalated into an LS conversion, and then a quest to see if we could then make the LS not look like an LS. We had seen quite a few conversions done in GM cars using kits from LS Classics or some of the custom units built by The Roadster Shop, but we had yet to see anyone do a Ford version. What we came up with was a set up similar to how the GM conversions are done, but allows us to use original Ford components for a truly period looking piece.

We were really happy with the end results and decided that since we already have the design part figured out we could also offer this package to anyone else who is wanting to move over to the dark-side and put a modern LS in their classic Ford. The package we developed includes the valley plate, valve cover adapters, distributor cap conversion, and hardware. You provide the FE valve covers, FE oil fill tube, and air cleaner lid from your original FE engine. The intake and air cleaner base we used came from LS Classics and gave us the perfect set up to finish off the package. The mock distributor system we built is designed to use standard 8 mm plug wires that you custom build to length for your set up. 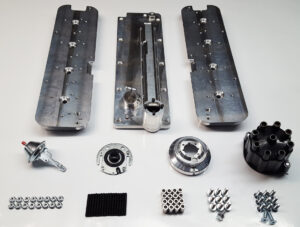 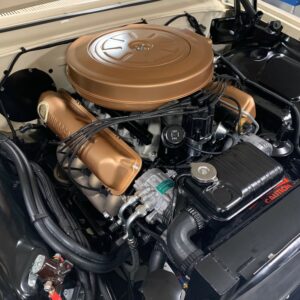