The car building hobby and industry has been continually embracing more electronic controls into use, and with the popularity of fuel injection and digital/electronic dashes there can be some confusion as to the best way to get the speedometer signal from the transmission to the ECM and then to the actual speedometer. We’ll try to break it down and give you an overview of the most common applications we come across to help save you a little time and effort in your wiring adventures.
There’s several different types and styles of engine control modules (ECM) available in the market today, but we’ll touch on the 2 most common that we see used. The GM controller and the Holley Terminator & Dominator systems. Both of these systems can be bought with an integrated transmission control module for an automatic transmission, and in those scenarios, there’s nothing special you need to do other than plug it directly into the transmission speed sensor, set up your transmission programming and off you go. However, if you have purchased an engine only controller, and intend on using it with a manual transmission or stand alone automatic transmission controller, there will be some alternate ways to make these connections. 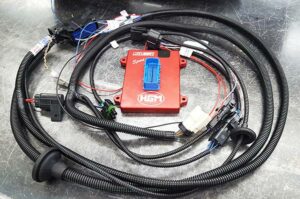 We’ll start with an example that we use here quite often. The HGM electronics Compushift Sport 3 along with a GM ECM. In this instance we’re using an aftermarket transmission controller with a GM ECM that only controls the engine functions. The harness for the GM ECM will still have vehicle speed inputs in case you would be using it with a manual transmission that doesn’t require a control module, but that connector cannot be directly plugged into the transmission. In this case the Compushift controller will be what is operating the transmission and will require it’s harness to be connected to the speed sensors of the transmission leaving the GM connector with no place to plug into. The Compushift will give us a way to feed the signal into the GM ECM via the “speedo out” wire included in the harness (pictured below) 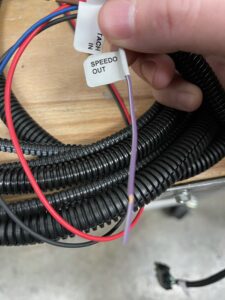 The connectors in the Compushift harness labeled TISS and TOSS (pictured below) will be what is connected directly to the transmission speed sensors. It’s important to also remember that not every transmission will utilize the TISS which is the input speed coming from the engine RPM, the TOSS is the actual output speed of the transmission or what we want to see on the dash speedometer. Most of the early electronic transmissions only use the TOSS and the TISS connector remains unplugged and tucked out of the way. If you happen to mix these up you will know right away during the first test drive when the transmission refuses to shift or shows an erratic speed signal. 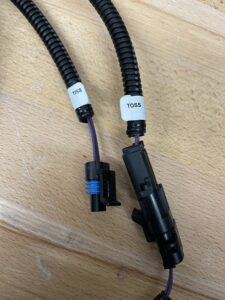 Pictured below is an example of a 4L80E with both input (TISS) and output (TOSS) speed sensors. The Compushift is able to read both input and output speeds to help determine if there are any issues within the transmission. It uses a calculation based on incoming RPM vs. output speed in each gear relative to each other and has a specific amount of variance built in. If there is too much of a variance between the 2 signals in any given gear it will produce an error code to be checked. This can give you an early detection of problems with clutch slippage internally before a catastrophic failure occurs. The later model GM 4L70E and Ford 4R75W transmissions will also use an input and output speed sensor set up, however, the GM 4L70E input sensor is internal rather than external like the 4L80E. 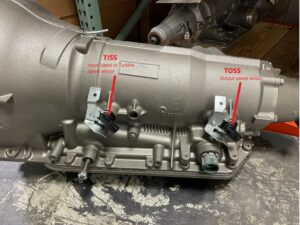 Now that we’ve covered how to correctly connect the Compushift we still have to feed the reproduced speed signal into the GM ECM. Nearly all the current GM harnesses will use a combo of purple/white (VSS TOSS Hi) and light green/black(VSS TOSS Lo) wires for the speed signal connector. The purple/white (VSS TOSS Hi) will be matched up to the purple/white “speedo out” in the picture shown earlier. This will allow the GM ECM to receive the TOSS signal from the Compushift controller. The light green/black wire will need to be connected to a vehicle ground. From here the GM harness will give you another output in the bulkhead connector for a speed signal that can then be used to drive a dash speedometer. This is typically a single Brown wire, but note that GM operates on a 40 pulse signal, so if your speedometer requires a specific signal pulse you may need a signal converter like the Classic Instruments SN74z to alter the signal pulse going into your speedometer.

Switching gears a little we’ll look at how integrating a Tremec T56 Magnum transmission into that same GM ECM looks like. The Tremec Magnums for GM engines utilize a Ford style speedometer plug and only produce a 17 pulse VSS output. This is going to be an issue for the GM ECM and harness which is exactly why we developed the All-in-One harness for these transmissions. The All-in-One harness will correctly connect to the Ford VSS plug on the transmission and can then take the 17 pulse output and convert it to the 40 pulse signal that GM operates on. The All-in-One uses a small integrated processor that can be controlled via Bluetooth by your phone or tablet with our free app. The app allows you to dictate what speed signal is being fed out to the ECM ensuring you always have the correct speed signal available. We also provide a secondary output that can be set up with a different speed signal if you would need to send a different pulse count to another component such as your dash speedometer or cruise control module. 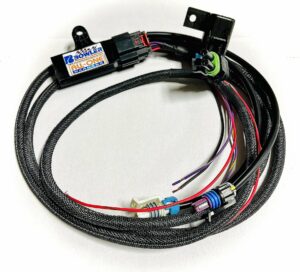 The connection of the All-in-One harness to the GM ECM VSS input is the same as how we connect to the Compushift. The purple/white output wire on the All-in-One is connected to the purple/white (VSS TOSS Hi) in the GM harness, and then ground the light green/black wire. The Magnums are also equipped with a reverse lock out solenoid that prevents you from shifting into reverse while shifting into 5th gear on an upshift or down shift. The All-in-One will operate the reverse lock out via a speed setting programmed into the controller to replicate this function the same way it is done in an OE setting.
Another area we want to cover in a little detail are applications where you may be using an electronic speedometer with a carbureted engine or throttle body injection kit. Those set ups will not need to receive a speed signal into an engine controller, but will need an electronic speed signal for the speedometer. Both the Compushift and the All-in-One harness can feed speed signal directly to any electronic speedometer without the need for any other intermediate signal converters. This helps simplify the wiring and cut down the cost on any extra equipment that would normally be needed.