Torque converter lock up is one of those things that can be easily overlooked in the normal operation of any newer automatic transmission. With the computer controlled transmissions we are used to driving today the converter will lock and unlock without us ever realizing what’s going on. The lock up converter was introduced in the late 1940’s, but due to the extra costs, it never gained popularity until the late 1970’s when the energy crisis demanded a more efficient operation of automatic transmissions. Most of us hot rodders always think of the GM 700-R4 & 200-4R transmissions as our first experience with setting up a lock-up converter, as they are still very popular today.

If you’re unfamiliar with exactly what the torque converter lock up is or does, the easy answer is, the lock up clutch takes stress off the fluid coupling of the torque converter and it helps decrease the amount of heat being generated at higher cruising speeds. Converter lock up wasn’t really an issue until the overdrive came about. When the transmission is tasked with spinning more RPM than the engine, the fluid coupling of the torque converter has a hard time keeping up with the demand and will begin to generate extra heat. When the converter is “locked” it is just like a direct drive manual clutch system allowing the stress to be taken off the fluid coupling and placed under full mechanical load. Most of the time you never notice this transition as it is essentially seamless, but with some of the older 4 speed automatics it will seem as if the transmission has a 5th gear or extra over drive when the converter locks up since it will typically reduce engine speed by a few hundred RPM.

Torque converter lock-up is engaged through a solenoid mounted inside the transmission. When the solenoid is energized it redirects the fluid flow back through the input shaft to put pressure against the clutch assembly allowing it to engage with the front of the torque converter. This takes the fluid coupling of the impeller, stator, and turbine out of the equation which gets rid of the parasitic loss of the fluid coupling as well as the extra heat generated from the turbulence created by that action. You are now getting a solid 1:1 direct drive from engine to transmission. 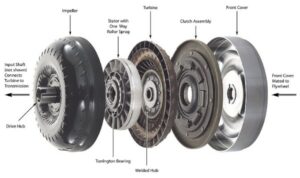 Here are the basic parts of a standard lock up torque converter. The big difference is the clutch assembly. This clutch acts just like a clutch disc in a manual transmission application. When the converter is “locked up” this clutch is forced against the front of the converter creating a direct drive from engine to transmission.

If you’re working with an older mechanically controlled automatic with a lock up converter there are several variations of lock up kits available on the market today. Some aren’t much more than the old toggle switch; some are much more advanced and include adjustable parameters to dictate how and when the converter lock up is activated.

Here at Bowler Performance we designed our lock up module with simplicity in mind. We wanted to create a lock up system that would work with any engine combination in any vehicle. It had to be simple to install, and most importantly it had to work without any interface from the driver.

The solution was a timing based module system that activates the converter only after the transmission has shifted into 4thgear. The basic operation is quite simple. When the transmission has shifted into 4th gear, the pressure in the valve body closes a pressure switch that then creates a ground input. Once the ground is established, that completes the circuit in the timing module which is receiving a +12 volt signal from the fuse panel.

We also include a cruise control style brake switch that works perfectly to disconnect the +12 volt power to the lock up module when the brakes are applied. This pulls the converter out of lock up to allow the car to easily accelerate back up to speed before the lock up re-engages.

The entire lock up system can be installed by anyone with minimal mechanical skills. The internal components are all accessed by removal of the transmission pan and filter only. There are no special tools or procedures required. We include every component needed to connect the system and get it working properly. This ensures that whether you have a newly re-built unit, or a unit that has been in service for years, all the parts are there and correct for proper operation.

When looking at the kit you may be wondering why we included a new solenoid and pressure switch. The reason being is that GM used a variety of ways to engage the lock up depending on what the engineers were trying to achieve. Each method uses slightly different wiring options on the solenoid or different pressure switches. Even if you have a brand new rebuilt transmission we encourage you to install the entire kit to ensure that it functions exactly as we have designed it.
Regardless of how you are finalizing the installation of your transmission it is critical that you have some way of turning your lock up on and off. Neglecting this part of the transmission will result in poor performance and overheating conditions. If you’re unsure of what to do please give us a call and we will be happy to guide you in the right direction.

4 thoughts on “Getting locked up : Why the torque converter lock up is important.”