I’m not even going to begin to try and argue what the best engine of all time is or whether or not it’s wrong to put a GM engine in a Ford bodied vehicle, but one things for certain, Ford engines are still popular! Ever since the debut of the Flathead, Ford has designed some of the most iconic engines ever made, even if they are foreign territory to Chevy small block and LS engine folks. We’ve always been Chevy heavy here at Bowler Performance, only because that’s what we’ve always liked, and you tend to focus on the stuff you like, however, that’s not to say we shy away from the Ford stuff. 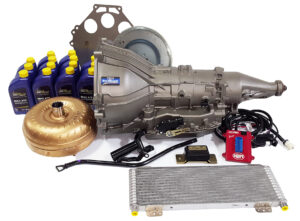 If you’re planning a build and using a Ford power plant we can typically get you covered for just about every combination you can think of. When going the automatic route we focus on the Ford 4R70W 4 speed automatic that was used from the mid 90’s up until the 6R80 6-speed automatic debuted. The 4R70W has proven to be a great transmission and Ford used it heavily throughout it’s line up of rear wheel drive vehicles from the Mustang to the F-150, and the other cool part is they used it on their traditional small block engines and the newer Modular style motors. This allows us a wider range of application when transplanting into a hot rod. Since the 4R70W was designed for light duty use there’s only a limited amount of upgrades available to allow it to handle big power. We currently offer 2 versions to accomodate different power ranges. The base line Tru-Street is rated for up to 400 ft/lbs of engine torque and our performance level build allows for up to 550 ft./lbs. If you’re going Ford and going REALLY big power with an automatic there’s really nothing better than the GM 4L80E, and we can adapt that transmission to work with almost every Ford engine out there. Also, speaking of different Ford engines, since the 4R70W was only built for the small block and Modular engines, and the fact that it uses a fixed case design for the bellhousing, there are plenty of adapter kit options for using the 4R70W behind the FE, Big Block, “Y” block, and many of the inline 6 cylinders.

If manually shifting the gears is more your style then we can also get you covered with a Tremec conversion package. With the wide variety of bellhousings available today we can adapt a T5, TKO500/600, or even the Magnum 6 speed behind nearly all the Ford engines. There are also plenty of clutch options for power levels that range from stock to way more than you need in a car on the street. The only parts that may be a little tricky to come by are some of the vehicle specific transmission crossmembers and hydraulic master cylinder conversion kits. As with most things aftermarket, the more popular a vehicle platform is, the more likely you’ll find some trick custom parts for it. 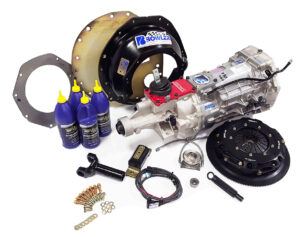 Regardless of what make or model your project is we can usually put a transmission package together for you. We specialize in overdrives and helping fellow enthusiasts build the car or truck they’ve always wanted. Contact us anytime with your plans and let’s see what we can do for you.