As each year passes and another generation of car enthusiasts start to come of age we see more cars come to popularity that were once lost to the fading memories of our childhood. Many of us in the 35-50 year old range have fond memories of the 3rd Gen Camaro built from 1982-1992. What started out as an extremely weak sports car that eventually came of age during the EFI revolution of the early 90’s is starting to make an even stronger comeback now as more hot rodders are rescuing these cars from the depths of trailer parks and overgrown back yards. With the wide availability of LS engines and performance suspension upgrades you can easily create a strong contender to go up against any new Camaro out on the track. 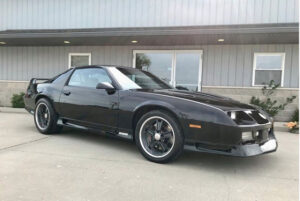 One of the first things you will want to do to these cars is figure out how to make more power. The 3rd Gen Camaro was never celebrated for having a lot of horsepower with the then famous 5.7L TPI engine cranking out 245 H.P. at the height of its game. After the power level gets addressed we see the snowball start to form and it’s all downhill from there. The transmissions attached to the original engines were built to handle the horsepower and torque of those days, so now with a more powerful engine comes a new transmission. If you’re an automatic fan the 4L60E is a great choice to go with for a direct swap, or if you’re building really big power and you don’t mind some slight modifications the 4L80E, when built correctly, will handle just about anything you can throw at it. If you’re looking to keep the control in the palm of your hand and nothing but a manual transmission will suffice, you will quickly find the end of the T5’s life expectancy once the power level gets bumped.

There are several manual transmissions available that are great alternatives for the T5 depending on what your end goal is, but if you are looking for strength and ease of installation the Tremec TKO500/600 is probably your best choice. The TKO line from Tremec is a simple swap over from the original GM T5 that came standard in the manual shifted 3rd Gen Camaros. Even if you aren’t going to be making big power the Tremec TKO is a great transmission to swap over if your existing T5 is feeling pretty tired as was the case for our 1991 Z-28 “Black Magic”. Project Black Magic came equipped with the 5.0L TPI engine and T5 transmission from the factory. The car had yet to see 100,000 miles, but the factory T5 didn’t inspire any confidence in its ability to keep up with some light autocross or road course driving. We opted to swap in a TKO600 and if you’re curious as to how the conversion unfolded keep reading for the installation overview, and see how in a weekend you can easily convert your car without making any serious modifications.

The factory T5 sits in the car at a 22 degree angle to the left for optimal shifter placement which, unfortunately, eliminates using the factory bellhousing for the swap. The T5 and TKO use the same bolt pattern and bearing retainer diameter so they will technically fit the same bellhousing, but the TKO shifter is designed to sit vertical and thus rules out that option. The other benefit of going with a new bellhousing is more options for clutches and flywheels. The factory bellhousing would only allow use of a 153 tooth ring gear, but the aftermarket replacement allows us to use the larger 168 tooth ring gear flywheel. Keep in mind though; the change in flywheel diameter will require a change in starter as well. The gear ratios between the T5 and TKO are different, but not so much that it necessarily requires a rear gear change. There are 2 overdrive options available for the TKO600, the .82 & .64. Our Black Magic car will see a lot of highway driving so we are opting for the .64 OD. The .82 OD is a great option for anyone building a road course specific car or need a higher RPM range on the highway due to rowdy camshaft profiles. 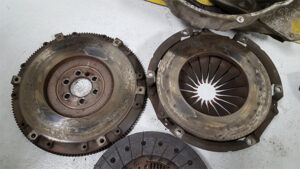 Since the T5 and the TKO both have a 1.125” diameter 26 spline input shaft we could’ve used the existing clutch, but when we took the original clutch apart we noticed that there was quite a bit of glazing on the disc and some hot spots on the flywheel and pressure plate. We opted to replace the original set up with a single disc RAM HDX series clutch and RAM billet steel flywheel. If you are retaining the original engine in your 3rd Gen Camaro, be sure to know which version of engine you have. The early V8 cars still used the internally balanced 2pc rear main seal blocks and the later cars will have the externally balanced 1pc rear main seal block. 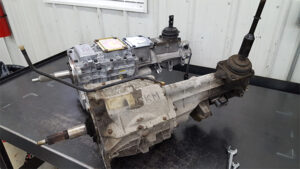 Once the bellhousing and clutch changes were handled we opted to go with a hydraulic release bearing from Tilton rather than keep the external slave cylinder the factory used. This changeover isn’t necessary, but eliminates a few more parts that needed to be replaced anyway. Since the factory master cylinder to slave cylinder line would not be a direct connection to the new Tilton bearing we were able to swap it over to a braided stainless -4an line. The factory master cylinder uses a roll pin fitting that can be removed and replaced with an AN to roll pin fitting for ease in changing line styles. If you’re familiar with the 98-02 F-Body master cylinders that gets used in a lot of first gen Camaro hydraulic conversions, this 3rd gen unit is very similar so there’s no real need to upgrade unless you really want to.
This is where we get to the really great part about swapping the TKO in place of the T5. Since the TKO and T5 are only fractionally different in overall length, the driveshaft length stays the same after swapping over to a 31 spline slip yoke and even the factory crossmember can be retained after the trans mount holes are slightly elongated. There are several aftermarket transmission crossmembers that are available as well for the T5 or 700R4 that will also work with the TKO change over. The clearance in the transmission tunnel is very tight but the TKO will fit without any modifications. The TKO tailhousing even retains the correct casting for the torque arm mount just like on the T5. 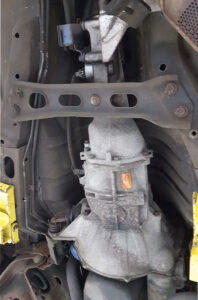 Once the new TKO and bellhousing is installed you will notice that the shift stub isn’t quite centered in the hole anymore, but it will still clear the entire area through all the gears. In order for us to get the shifter back in the original location we installed one of our new Night Stick offset shift plates with a 2″ offset directed to the rear. We chose to use an 8” straight shifter and it gives a good solid feel for each shift. Since the TKO doesn’t use a rubber isolator in the mounting of the shift lever the engagement is dead on and doesn’t have a loose, sloppy feel to it. When reconnecting the speedometer you have 2 options on the TKO, mechanical or electronic. If your car is equipped with a mechanical speedometer you only need to get the adapter for the transmission and thread your cable on. The electronic plug that GM used will be different and will require you to splice on a new connector to the existing harness; this is the same for the reverse light switch if you choose to hook it up. 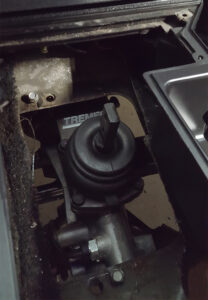 The final results were better than expected. We weren’t really gaining anything in a better overdrive ratio, but we did gain a much stronger transmission with a much better shift feel. As great as the T5 was for its intended use the TKO is just a much better 5 speed all around. We now have the ability to upgrade the engine or just flat out punish this transmission without worry of a failure. As a side note, if your car is currently an automatic, the swap can still be done, but you will need to acquire the 5 speed console (if desired) and the clutch pedal/master cylinder parts for a clean bolt in installation.